This is our recommended workflow for using:

together. We’re assuming you’ve already looked at stock GitFlow, and understand the concepts of feature branches, release branches, hotfixes, releases and the develop branch. If you haven’t, please first read: 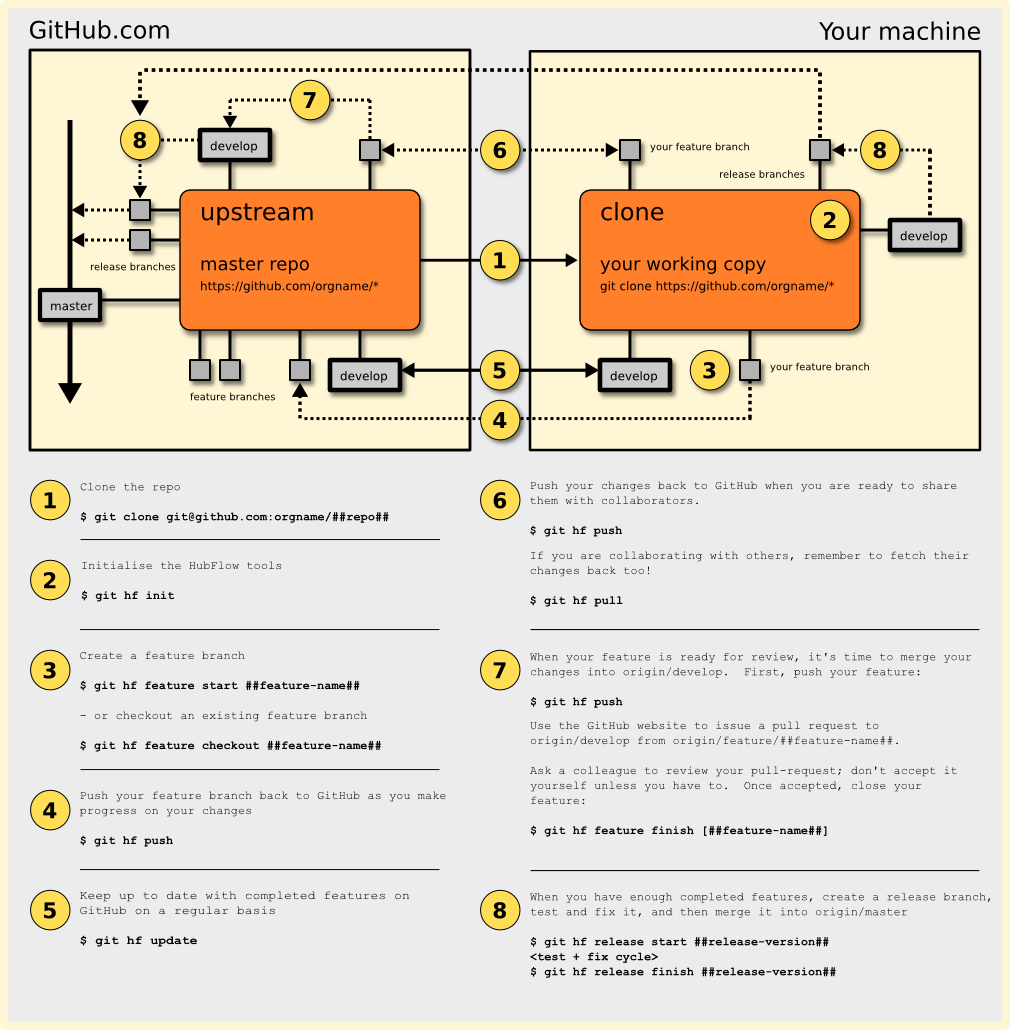 The key points are:

Clone the existing repo from GitHub to your local workstation:

The HubFlow tools need to be initialised before they can be used:

If you are creating a new feature branch, do this:

If you are starting to work on an existing feature branch, do this:

4. Publish The Feature Branch On GitHub

Push your feature branch back to GitHub as you make progress on your changes:

You’ll need to bring down completed features & hotfixes from other developers, and merge them into your feature branch regularly. (Once a day, first thing in the morning, is a good rule of thumb).

Push your feature branch back to GitHub whenever you need to share your changes with colleagues:

Pull your colleague’s changes back to your local clone:

7. Merge Your Feature Into Develop Branch

Then, use the GitHub website to create a pull request to ##reponame##/develop branch from ##reponame##/feature/##feature-name##. 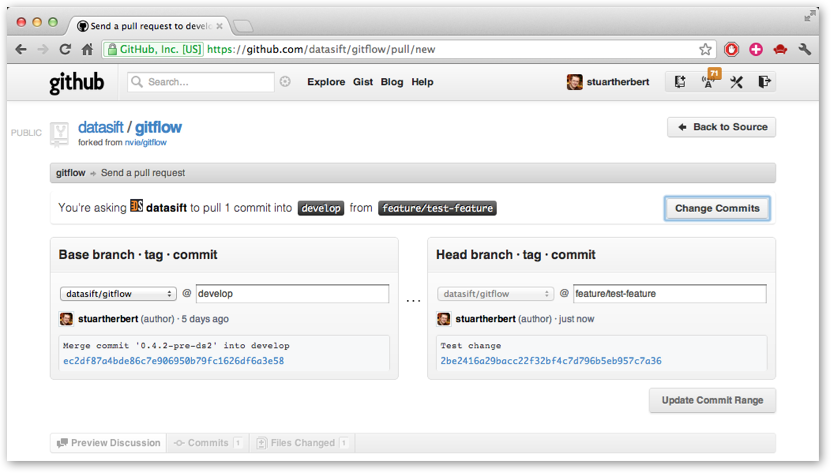 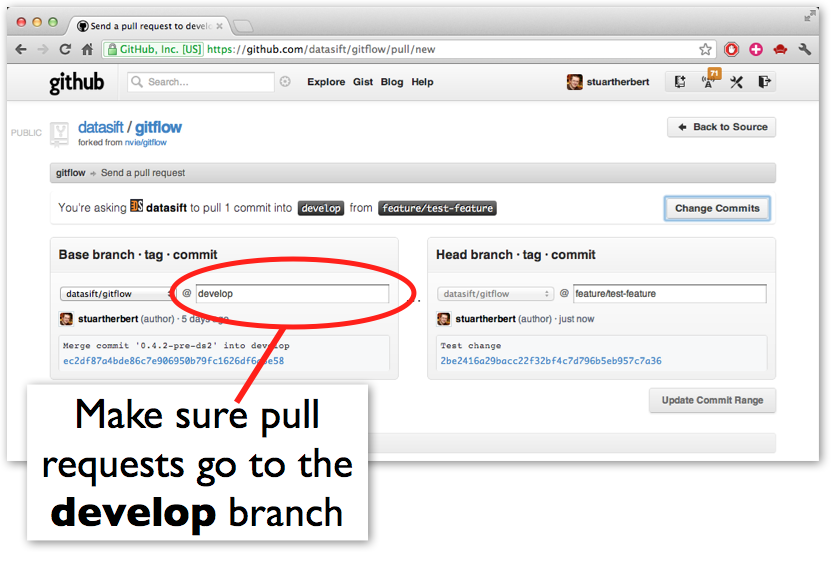 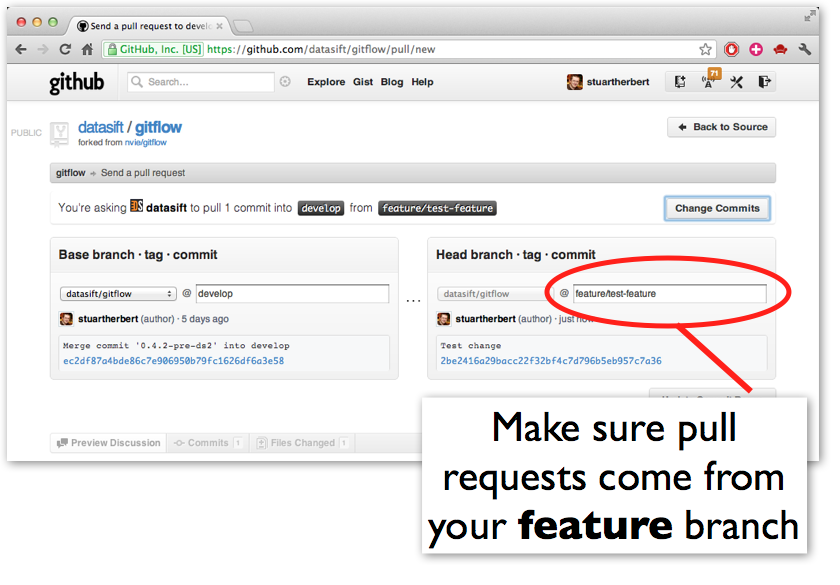 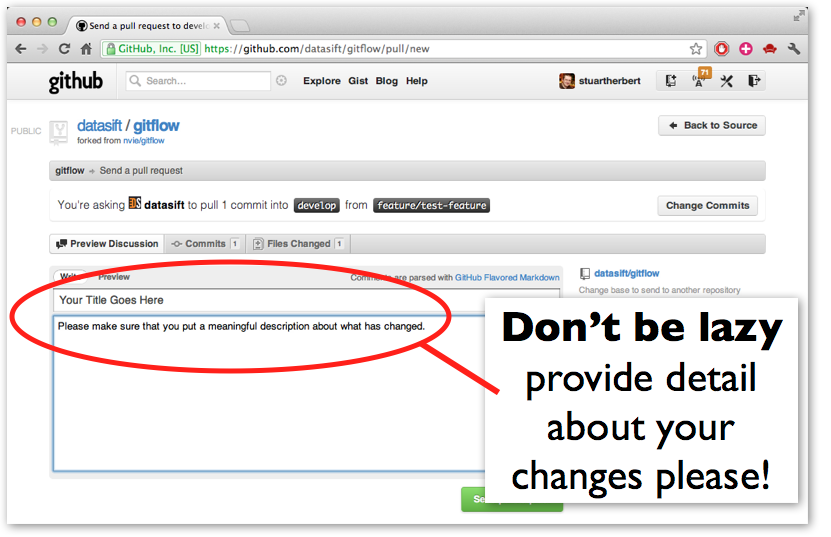 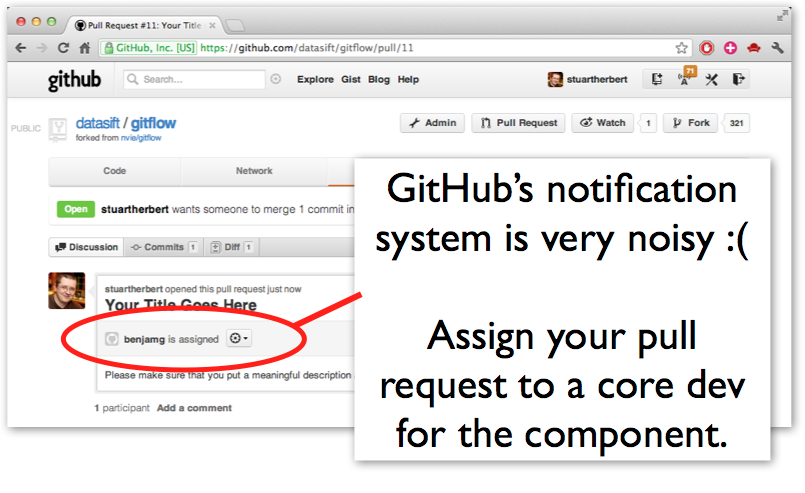 Ask a colleague to review your pull-request; don’t accept it yourself unless you have to. Once the pull request has been accepted, close your feature using the HubFlow tools:

When you have enough completed features, create a release branch:

Release branches are given version numbers for name. For example:

Once you’ve created the release branch, remember to update the version number in your code (in the pom.xml, Makefile, build.xml or wherever it is stored).

Build the code, deploy it into test environments, find bugs. Fix the bugs directly inside the release branch. Keep building, deploying, debugging, fixing until you’re happy that the release is ready.

When you’re ready to tag the release and merge it back into master and develop branches, do this:

This closes the release branch and creates a tag called ##version-number## against the master branch.

A hotfix (not shown on the diagram at the top of this page) is a special kind of release. Unlike features and releases (which are branched from develop), hotfixes are branched from master. Use hotfixes when you want to make and release an urgent change to your latest released code, and you don’t want the changes currently in develop to ship yet.

To create a new hotfix:

This creates a new branch called hotfix/##version-number##, off of the latest master branch.

Once you’ve created the hotfix branch, remember to update the version number in your code (in the pom.xml, Makefile, build.xml or wherever it is stored).

Edit the code, build it, deploy it into test environments, make sure that your hotfix works. Keep editing, building, deploying, debugging and fixing until you’re happy that the hotfix is ready. Remember that you can use the git merge command if you need to merge changes from a feature branch into the hotfix that you are preparing.

When you’re ready to tag the hotfix and merge it back into master and develop branches, do this:

This closes the hotfix branch and creates a tag called ##version-number## against the master branch.

Be careful with hotfixes:

You can use git hf hotfix start ##version-number## ##older-tag## to create a hotfix off of an older tag. However, if you look back at Vincent’s original diagram, notice how changes happen in time order. When you finish this kind of hotfix, it gets merged back into the latest master branch; it does not get merged into just after the tag that you branched off. This can cause problems, such as master ending up with the wrong version number, which you will have to spot and fix by hand for now.